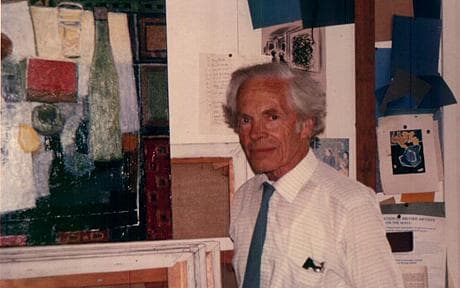 Sir Colville Herbert Sanford Barclay, 14th Baronet (7 May 1913 – 1 September 2010) was a British naval officer, painter and botanist whose career spanned amphibious landings and commando operations off the coast of France during the Second World War, having his paintings exhibited at the Royal Academy, publishing reference works about the flora of Crete and taking commissions to obtain plant samples from across the world for the Royal Botanic Gardens, Kew. Operating from a studio at his home, first in London then in Denham and subsequently Pitshill, Barclay experimented widely with his art and was exhibited at the Royal Academy and in many other places. A number of his artworks were purchased by public galleries, although he had no necessity to sell. It was not until he was in his nineties that Barclay claimed that he had finally been able to paint in the manner he wished.  Photo credit : http://www.telegraph.co.uk/