News | The female gaze - an artist speaks out

While there are some artists we can think of whose nude work fits this description - the late Sir William Russell Flint RA is a good example, as are those “contemporary” Russian painters whose pert-titted creations used to pop up at auctions for oligarchs - Prof Beard was bold enough to suggest that even Titian had been guilty of titillation.

As criticism of “the male gaze” has become rather strident of late, we’d like to present a sideways view on the subject by showing the work and hearing the opinions of FEMALE artists who specialise in the nude, both female and male.

We don’t yet have much of Juliet’s work in our gallery, but we plan to shoot a short film with her soon. Meanwhile here are Juliet’s replies to a few questions Robert recently put to her.

Why do you paint and draw women, or more to the point naked women?

I simply like to draw! I love form, lines, curves and texture in any format. I approach painting naked in women in exactly the same way I approach a study of a flower: prominent lines and curves and relationships with negative space.

I choose, predominantly, to draw naked women because the nude form on a canvas is a great artistic device - people like to stop and stare at something they may consider a bit naughty. Also, the female form is so integral to the history of art that you sort of feel like a proper artist if you “do nudes”.

I’ve always loved drawing women, from the age of three and before I could even write. I used to like painting bikinis over the Page Three Girls in the Sun. As an art student I had about seven years of weekly life-drawing classes, so my art education was very much figure-centric. 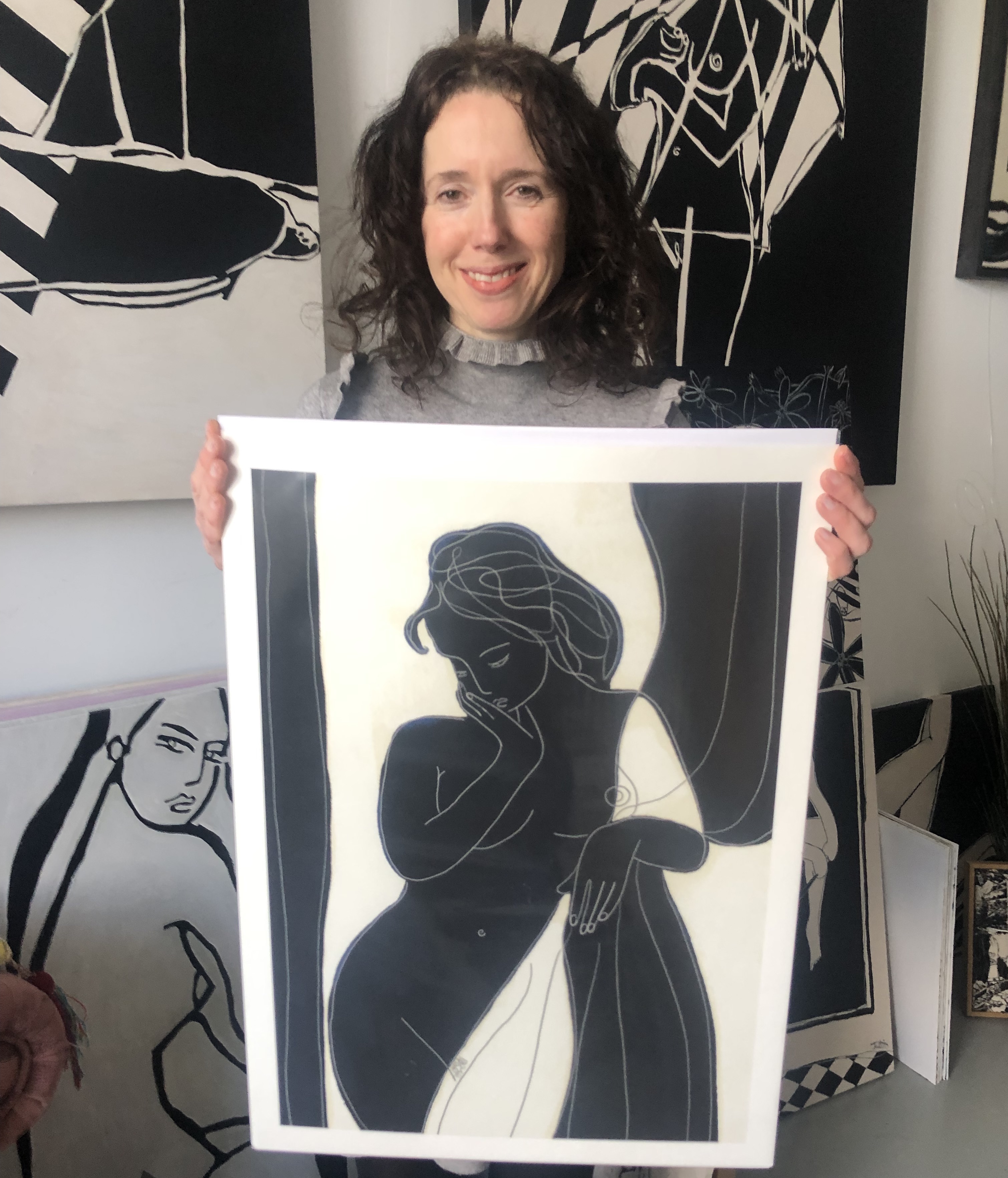 There shouldn’t be, at least at a basic objective level of draughtsmanship, where the act of portraying a subject is all about anatomical relativity and balance etc.

At a subjective level it’s down to whatever’s going on in the individual artist’s mind, regardless of gender. In conventional, representational art of the last few centuries I imagine the approach of a male versus female artist would have been clearer: the male artist may have been predisposed towards fetishising the female form and the female artist would be more likely to look upon her subject in a sisterly or matriarchal way. So the male depiction of a female subject would be focussing on her physicality, whereas the female would be attempting to make an emotional connection with the viewer.

In the 21st Century there is a wave of young, radical artists, whose subject matter leans towards explicit sexualised images of the nude. There’s certainly be a greater blurring of gender boundaries in their approach to depicting the female form. I’m thinking of artists like Martin Eder, Helen Beard, Celia Hempton - just a few who spring to mind. Hempton experiments with voyeuristic and pornographic themes by painting male nude models via webcam (I think she does pay-per-view, if I remember correctly), which would traditionally have been regarded as pertaining to the male gaze but brilliantly flips it on its head. 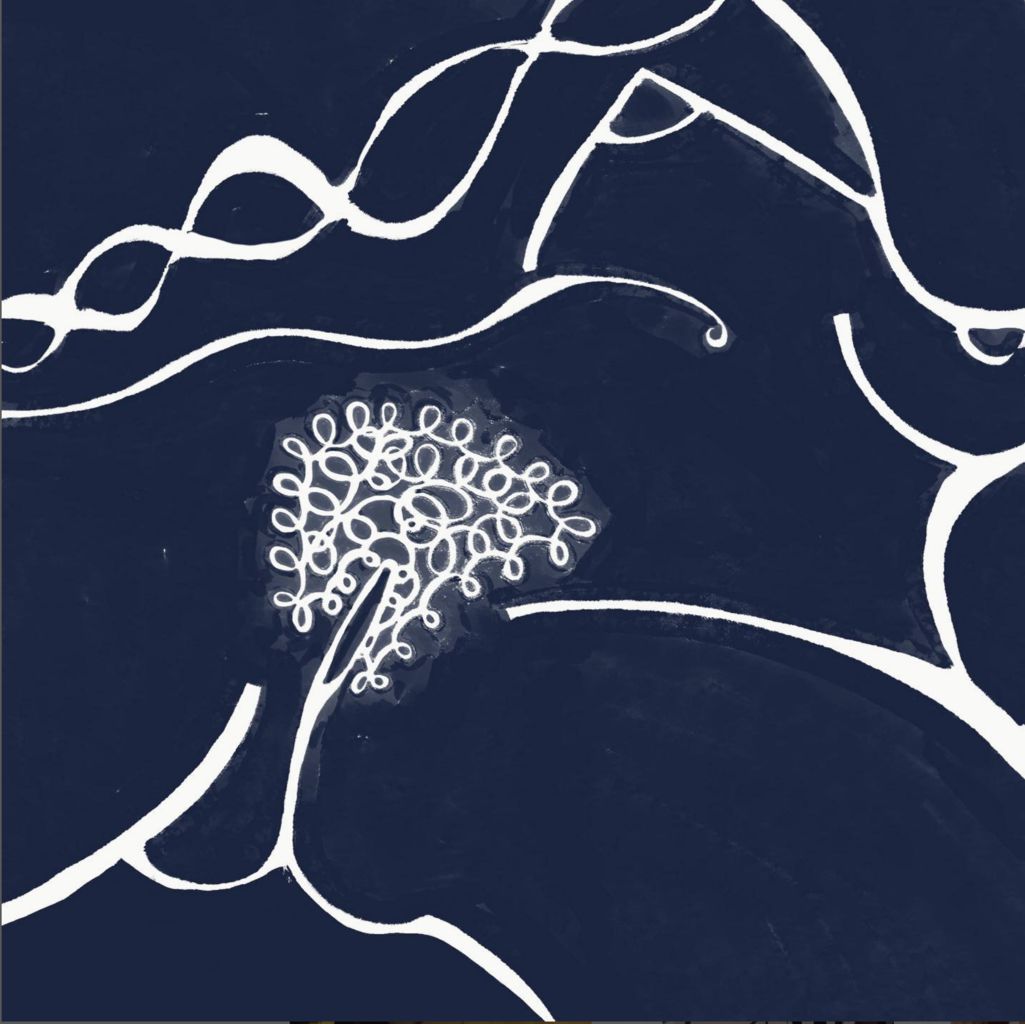 What does the phrase “the male gaze” mean to you?

The male gaze: the ownership of the female, whose existence is there for the pleasure of the male viewer and void of her own identity; a blank canvas upon which the viewer may project his desires. Exemplified by a full frontal nude making direct eye-contact with the viewer.

Is that a good thing or a bad thing?

It’s a double-edged sword, isn’t it? Aligned with sexism and misogyny and all things historically male-dominated, like pornography, advertising, films, casinos, even airlines with the “trolly dollies” of old. Yet without this history of the male gaze there wouldn’t be the backlash that’s pretty much defined contemporary culture, particularly within social media. We have these “influencers”, who can pretty much flog anything they’re asked to promote due to their massive, captive audiences on platforms like Instagram. The headline-grabbers in this field tend to be women: the Kardashians, the Love Islanders, the TOWIEs etc. These are supposedly empowered women in charge of their own brand identity and career paths and targeting female rather than male followers… but all have taken their visual cues from typical pornographic imagery. They all look like identikit porn stars with huge boobs and bums, hair extensions, botoxed lips and waxed pubic hair. Paradoxically, they are the walking embodiment of the male gaze… which travels full circle even when women take ownership of it and so it remains.

It comes down to one thing: sex sells; and that’s not a bad thing in itself but it potentially sends out worrying signals to impressionable young girls who are bombarded with these visual cues prolifically. The real danger lies within the associated mysogynistic intent of the male gaze and any such non-egalitarian behaviour towards women, which I would definitely consider a very bad thing.

I’m not a painter, but I am male, and what interests me, as a man who occasionally looks at and is attracted by pictures of naked women is the sheer simplicity with which a female form can be suggested, in just a few lines, a few brush strokes. It was a quite startlingly simple drawing of yours that I saw at the RA summer show that first interested me in your work.

You must be referring to the Garden of Venus, one of two paintings I had at the RA in 2018. A monochromatic painting, drawn simplistically, but with quite an explicit, full frontal pose… that is pretty much my style in a nutshell: I draw and re-draw bodies until there are hardly any lines, but the lines that are there have the essence of what female beauty is about. 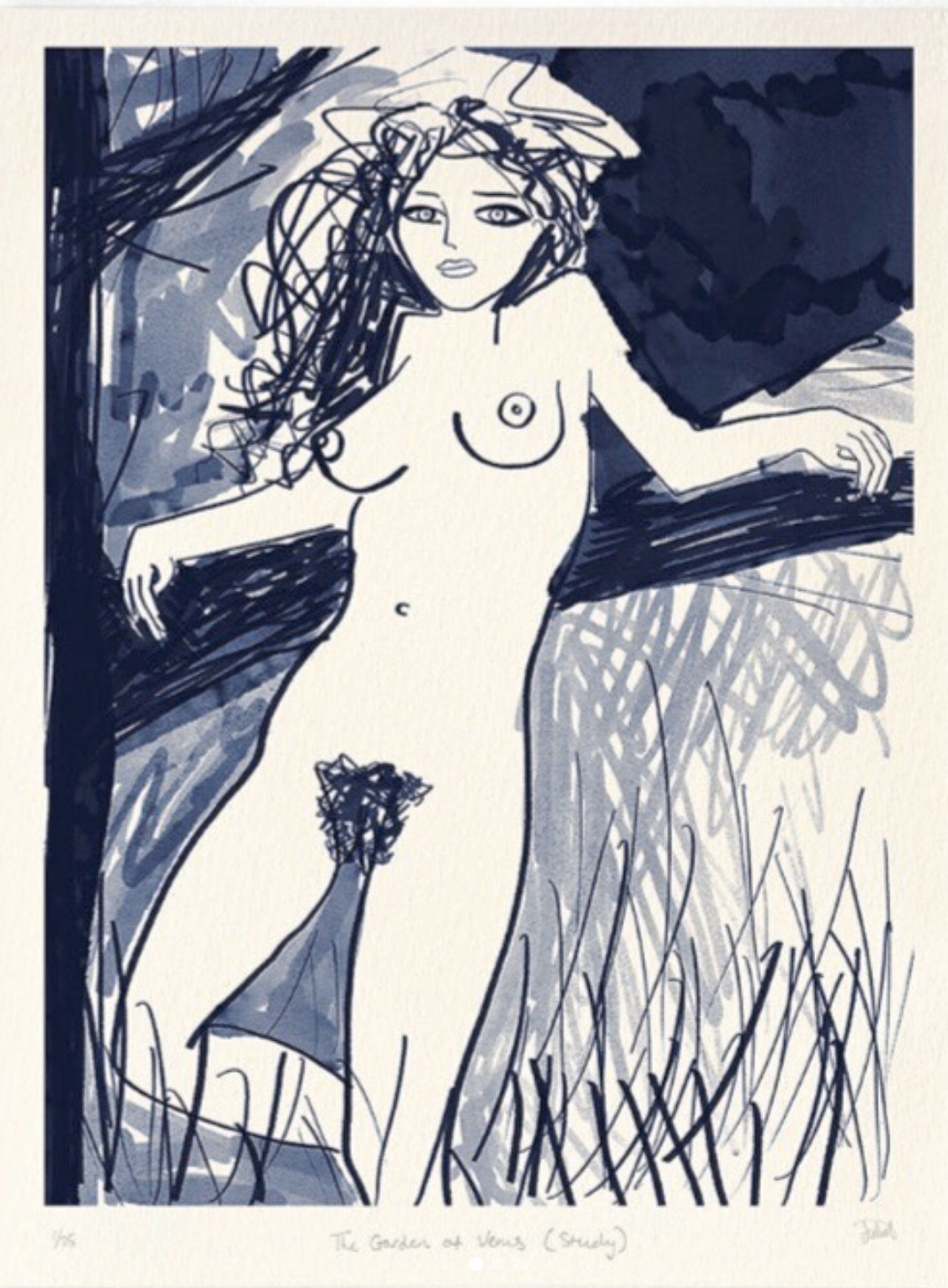 Within my paintings I try to address the male gaze by subverting its context. Quite often the nudes I paint are in that typical full frontal, eyes directly at the viewer pose, but then I’ll twist it by drawing in quite a naïve, de-sexualised way, or adding playful (sometimes hidden) elements. Sometimes I’ll take imagery that was originally something totally unsexy and innocuous like an old knitting pattern model pose, and recreate it as a sexy nude. I’m all for looking at the aesthetic side of pornography, too.

As painter of the female figure what do you see as the basic elements of a female nude?

Curves, form, a certain poetry of the lines of the body. When painting women I tend to imagine I’m that body and which muscles are doing the work or holding the weight of the body - they’re the lines I keep. Oh, and the eyes - eyes are my favourite thing to draw but I’ve got into a habit of barely showing them. I’ve tried more complex eyes but they look wrong against the minimalistic body.

After that are the fun parts - hair, boobs, all the “bits”. I don’t hold the body in too much reverence, I like it to be fun. 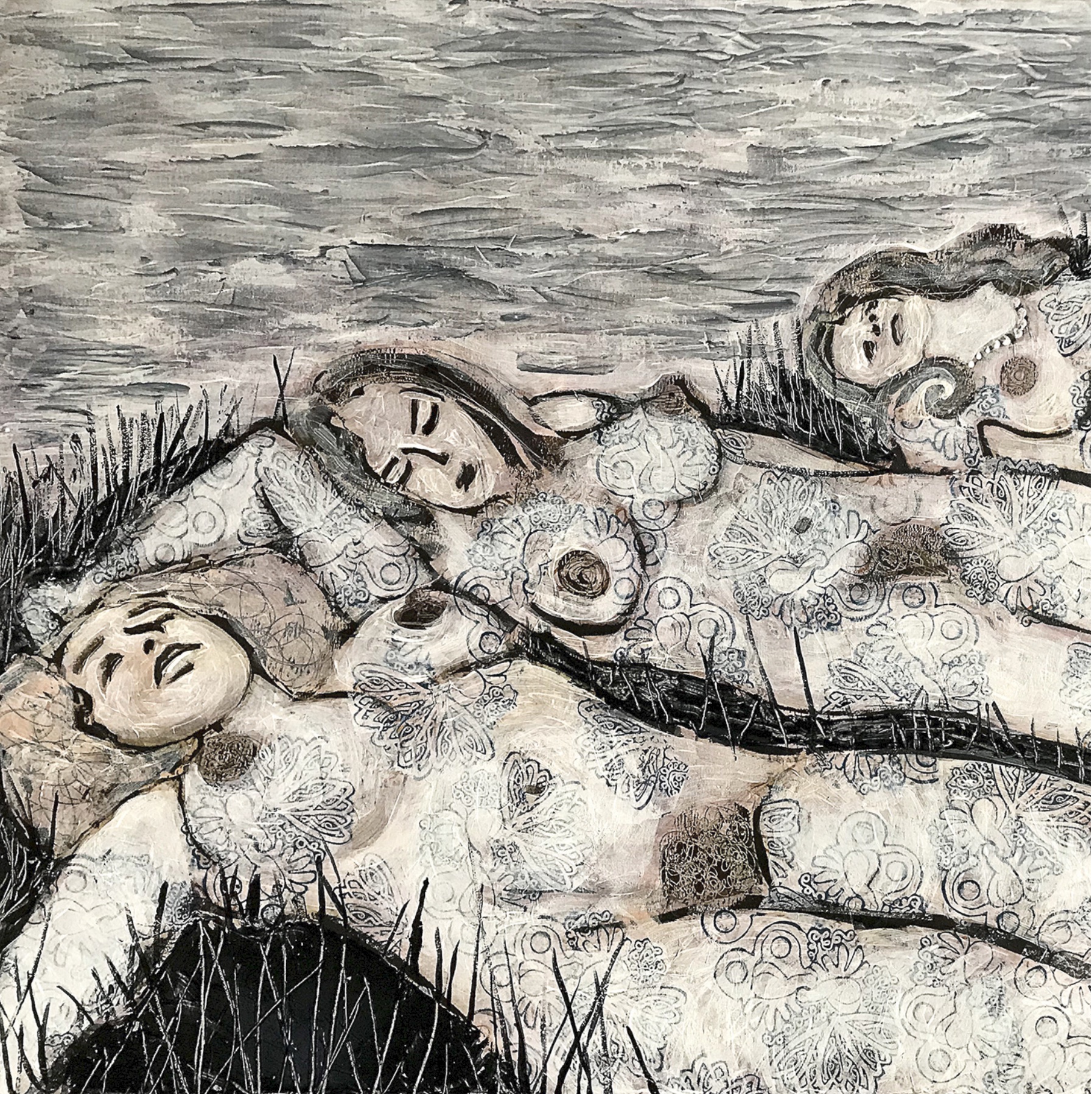 How much of your artistic impulse is biological and how much is aesthetic?

I am very much driven by aesthetics. I like to consider the female form as a woman who appreciates the shape and feel of a woman’s body. Biologically… well, I rarely paint with any emotional intent or desire to instil “womanliness” other than a nod towards a playful, coquettish sensuality.

Titian and co are there to inspire but not for me to imitate. I was an art student for a long time and partly raised in Florence so those beautiful paintings are in my blood; the joy is in creating something different and uniquely mine.

How/where did you learn your craft as an artist? What influenced you? Which artists do you most admire - or loathe?

My Father was a talented artist who taught me to draw before I could write. As mentioned, a lot of that was in the cultural epicentre of Florence…. but, it was in the 70s, and there was also a lot of disco, a lot of Eurotrashy, post hippy culture going on, which made a big impression. A lot of kitsch!

I studied art non stop from A level through to degree level. I gained a BA Honours in Fashion Design (specialising in print) at Central St Martins in London. It was very much a Fine Art fashion course though. I spent most of my time making clothes out of wire and papier-mâché!

I’m a sucker for late 19th/early 20th Century Modern Art, so my favourites are largely predictable: Picasso, Matisse, Kees Van Dongen. Slightly less painterly influences are Jean Tinguely and the photographers László Moholy-Nagy, Hans Bellmer and Bernard Faucon. Although I have quite a wide circle of artist friends, I try not to be too influenced by the current scene as I worry something will subconsciously slip into my work that I’ve seen someone else do… I prefer to find inspiration from diverse sources including buildings and music, both can really inspire me.

I find it hard to find anything I loathe, if I look long enough at anything I’ll generally find something inspirational in it. I’m not too keen on realistic portraits of people’s pets or old maritime paintings.

Are you gay or straight? Either way do you think it makes any difference to your way of seeing?

I’m straight. It makes no difference to me whether my paintings potentially turn on men or women. My figures are quite stylised and usually pretty girls with big boobs, which could be perceived as pandering to the male gaze and therefore taking on a heterosexual stance, but I see it more as subverting the male gaze, as a female executor controlling the image. I don’t think that being gay would make me see differently. My main agenda is to stick my fingers up at people who are funny about nudity - it’s just a body after all and we’ve all got one! 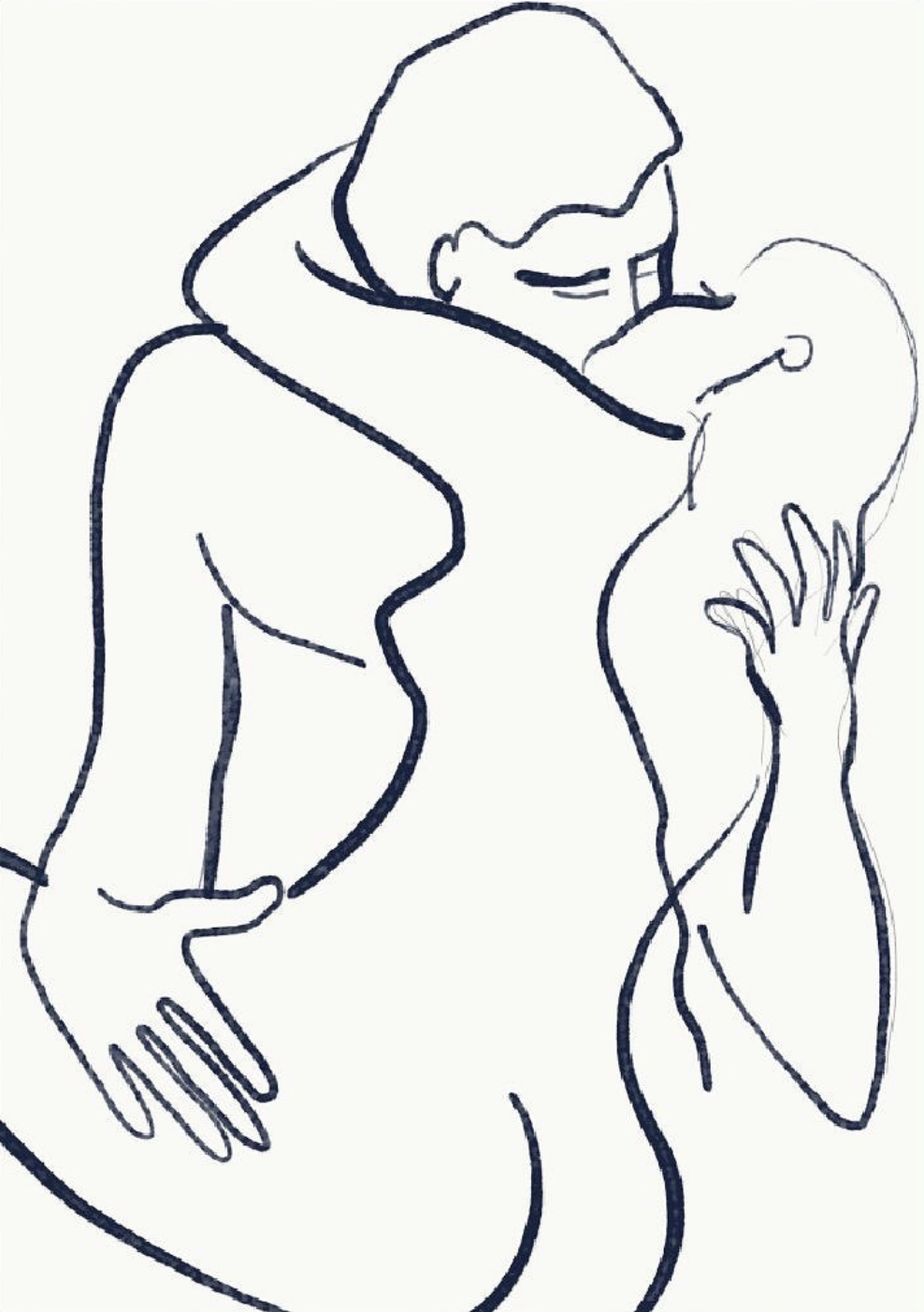 What else should I have asked you?

Question: What does the female gaze mean to you?

Answer: women are supposed to require emotional stimulation as opposed to the visual stimulus of the male gaze. They require context rather than a female gaze, there is probably an “anti male gaze” lobby out there, which would require the model in a painting to be clothed and looking away from the viewer at all times.

Question: If you could never paint female nudes again, what would you paint?

The Tree of Life - an exhibition of Arborealists